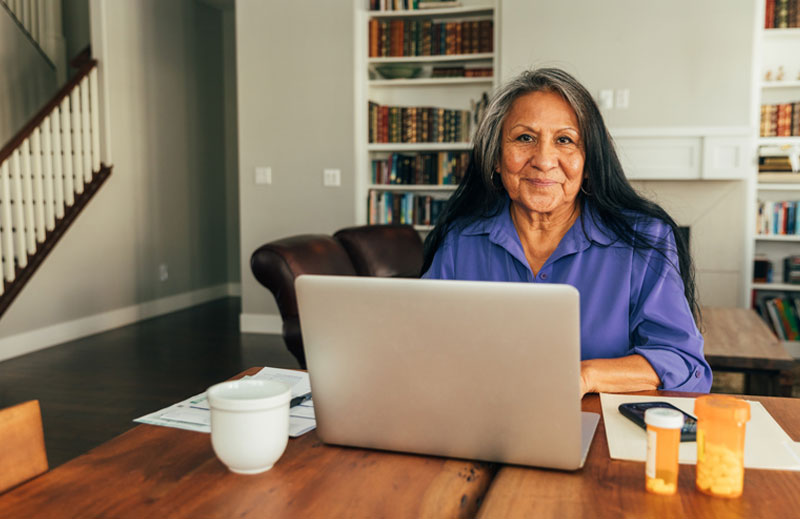 The Biden administration announced on June 3 nearly $1 billion would be available in U.S. Department of Commerce’s National Telecommunications and Information Administration (NTIA) grants to expand broadband access and adoption on Tribal land. These significant broadband investments are intended to make affordable high-speed internet available to all Americans.

NTIA is now accepting (and will soon be reviewing) applications for infrastructure projects that expand the availability of broadband services on Tribal lands and prioritize deploying broadband infrastructure to unserved households. The program also invites proposals that address the digital divide on Tribal lands, including broadband and digital inclusion planning, Telehealth, education, training staff and Tribal community members, and providing technical support and capacity building for Tribal institutions.

For Native Hawaiians, the program uniquely includes support for a type of subsea fiber cable which removes the high commercial costs often associated with cable landing stations owned by one specific carrier. Community broadband initiatives in Hawaii could flourish with inter-island fiber established by lowering the costs smaller providers have to pay to gain access to fiber backhaul. Historically, the state of Hawaii, not having neighboring states, has been unable to receive funding for a carrier-neutral cable landing station. The TBCP changes all that.

Grant Funding
Of the $1 billion, at least $30 million will be allocated to Native Hawaiians and each federally recognized tribe will be allocated at least $500,000. These amounts are not caps. NTIA anticipates awarding grants for network deployments of between $1 million to $50 million, although these figures are neither minimums nor caps. There is no cost-sharing or matching funding requirement. Up to 5% of the grant can be used for pre-application expenses, including costs associated with preparing the application. Award of a grant under this program does not affect the ability of an eligible entity to receive broadband funding under other federal programs.

In the Washington State, there are 29 federally recognized Tribes, any of which can submit their qualifying broadband projects for potential TBCP grants; this means at least tens of millions in grant money, if all Washington Tribes submitted their qualifying applications. Tribal governments must have actionable plans crafted and ready to submit by the Sept. 1, 2021 application deadline. NTIA anticipates that it will finish reviewing applications by Nov. 29, 2021, and start issuing grants by Dec. 12, 2021.

Uses for Grant Funds
Abridged from the NTIA, grant funds available under this program may be used for the following purposes:

The Tribal Broadband Connectivity Program invites project proposals for the deployment of broadband infrastructure on Tribal Lands, including support for the establishment of carrier-neutral submarine cable landing stations. Such infrastructure deployment projects may involve the construction of middle mile or last mile networks as well as interconnection. Applicants may propose projects that deploy new broadband infrastructure, replace antiquated infrastructure, or upgrade or extend existing infrastructure. For example, applicants may propose projects that utilize 2.5 GHz licenses or other licensed spectrum received from the Federal Communications Commission (FCC). NTIA requires construction of networks that use commercial grade equipment that will meet current needs and be scalable to meet future needs. Infrastructure can include, but is not limited to, cable, fiber, wireless, fixed wireless, and satellite. Section 905(c)(8) of the Act directs eligible entities to prioritize the construction of new broadband infrastructure proposals that will serve currently unserved households. NTIA will permit Tribes to self-certify the unserved status of proposed service areas within Tribal Lands, and lands providing services to Tribal members, with a description of how the Tribe determined that the area is unserved.

NTIA encourages infrastructure projects that enhance economic development and provide new jobs; expand education, Telehealth, public safety and telework access; and support smart technologies for agriculture, manufacturing, utilities, and government operations and services on Tribal Lands. NTIA encourages all applicants to focus on the ongoing sustainability of their broadband infrastructure projects so that they can best serve Tribal communities for the long term.

It is important that necessary investments in broadband infrastructure be carried out in ways that produce high-quality infrastructure, avert disruptive and costly delays, and promote efficiency.

The Act requires eligible entities to complete their projects within one year of their receipt of grant funds. The Assistant Secretary, however, may extend the award period for broadband infrastructure construction projects if the eligible entity certifies that: (1) it has a plan for the use of the grant funds, (2) the construction project is underway, or (3) extenuating circumstances require an extension of time to allow the project to be completed.

The Tribal Broadband Connectivity Program invites project proposals that address the digital divide on Tribal Lands, including broadband and digital inclusion planning, training staff and Tribal community members, and providing technical support and capacity building for Tribal institutions. NTIA encourages efforts to develop programs and other resources that not only address immediate COVID-19-related concerns, but also build the capacity of Tribes to use broadband to provide ongoing and sustainable benefits to Native American/Alaska Native/Native Hawaiian communities. The Act requires eligible entities to expend their grant funds and complete their Broadband Use and Adoption projects within one year of receiving grant funds from NTIA. There are no time extensions available for Broadband Use and Adoption projects.

Applicants may request funding for Broadband Use and Adoption projects that have at least one of the following purposes:

More information about the program, including requirements for grant applications, can be found here on grants.gov. If you believe you have a project that fits the criteria and seek experienced, regional insight, we can help.