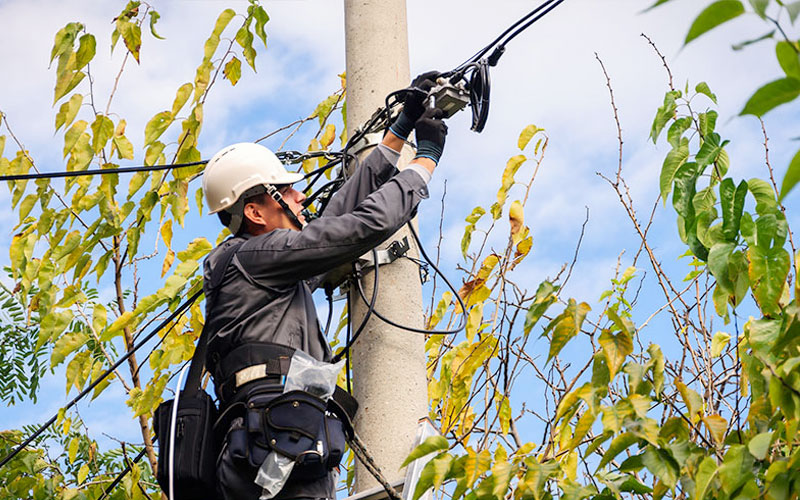 When the city of Anacortes, a community of approximately 18,000 people on Fidalgo Island in western Washington, began exploring ways to improve internet service, it began with a conversation with incumbent service providers in late 2014. City officials asked the incumbents if they could provide higher internet speeds. The incumbents offered disappointing answers. Their return on investment models typically did not indicate such network upgrades in a community the size of Anacortes to be financially viable; the shallow soil and underlying rocks of Anacortes would make new, underground outside plant deployments prohibitively expensive; and its geographic location “at the end of the line” meant that no synergies of subsequent network deployments to surrounding communities would be created. The city considered fiber optic connectivity a necessity, but construction and installation costs were prohibitively expensive.

At the same time, Anacortes was exploring ways to upgrade its radio frequency communications network between its water and wastewater systems. City officials’ research led to fiber optics. Fiber optic technology would bring advanced communications capabilities to public works facilities and build an important fiber infrastructure backbone, which could improve education, health care and quality of life for all community members.

This challenging task faced numerous obstacles. Getting the city connected with fiber optics meant it had to connect fiber from the city to its water plant 15 miles away and on the mainland. The cable would have to cross private and public properties, county roads and state highways and go over (or under) at least two major water crossings.

“At first it seemed impossible; I had no idea how to do it,” said Fred Buckenmeyer, the city public works director. But he researched a “fiber in water line” technology that provided a method to install fiber in a cost-effective and timely manner, and without disruptive construction, to connect the water treatment plant in Mount Vernon to Anacortes. This approach could help address an unreliable and outdated radio telemetry system serving the water and wastewater utilities. Two problems – telemetry and fiber backbone construction – could be solved with one technology.

The technology to run fiber lines through water pipes developed by the British-based Craley Group had never been used before in North America. The largest pipes that had been installed, in Spain, were about 10 inches in diameter. Anacortes was the first to install the technology in 36-inch welded-steel pipes.

The innovative approach meant no digging trenches and no piggybacking on power poles, which in turn meant no need to acquire dozens of easements and permits. Plus, it would make use of infrastructure the city already owned and controlled.

The fiber is used for telemetry to the booster stations and reservoirs, which provides Anacortes real-time information to monitor instruments for water quality. Craley also developed a system to monitor leak detection throughout the wet pipe connection.

Anacortes water distribution supervisor Terry Nemeth worked with Craley and a local steel fabricator to accommodate large diameter pipes. “Then we worked with Craley to develop a pull rather than push method for insertion,” Nemeth said. “This was the most extensive modification. It was just a matter of looking at what needed to be done. I think everybody was working outside of the box.”

Fiber Backbone Opens Door to Broadband
With the city’s water and wastewater utilities helping fund the cost of building a fiber backbone, Anacortes began exploring the financial feasibility of a fiber-to-the-premises (FTTP) network. Before beginning the project, Anacortes city officials asked the community for feedback about the value of broadband access. More than 1,600 people responded to a broadband interest survey, and most respondents were supportive, positive and hopeful about the impact broadband would have in the community.

“I was thrilled that we might have an opportunity to bring fiber to our community,” said Laurie Gere, mayor of Anacortes. She identified affordable, reliable, high-speed internet service as necessary to the community’s continued development into a true 21st-century city. She was determined to bring Anacortes higher internet speeds with greater reliability at affordable prices.

Vetting Provider Options
In Washington state, only cities are able to serve as retail service providers. Washington counties and port authorities have fiber networks that are wholesale only, but Anacortes wasn’t bound by that rule.

Anacortes city staff and the city council formed an ad hoc committee to develop a business plan and financial model for the city to become its own internet service provider. The plan laid out the city’s goals: deliver high-speed residential and business internet service at competitive prices throughout the community, provide excellent customer service, achieve a market share of 35 percent or more, pay for any construction loans with subscriber revenue, and spur local business development and economic growth. In addition, the city aimed to achieve payback on construction investment in 15 to 20 years and to become cash-flow positive in two to three years.

The city council approved the business plan and adopted a resolution outlining its desire to pursue a municipal fiber optic internet network. “Our city’s journey to a community-owned fiber optic network started with the recognition that in our globalized world, small towns often fall behind due to lack of scale, loss of human capital, and being on the wrong side of the digital divide,” said city council member Bruce McDougall.

The internet has fundamentally driven how business, government, education, health care and society have been operating, and we recognized that reliable, low-cost and high-speed access were critical to our success as a community. So we decided to build a communitywide network, be our own internet service provider, and take control of our digital destiny.” – Bruce McDougall

The fiber department and business operations are managed through the city’s administrative services department. Much of 2019 was spent establishing the framework for a successful business operation and ensuring access to materials and contractors to build the outside plant. Some of the backbone had been deployed as part of a public works telemetry upgrade project, but the city still needed to purchase materials and then engage Robinson Brothers Construction to deploy fiber optic infrastructure from the network core to each pilot-area neighborhood.

COVID-19 Causes Delays
In 2019, with some of the fiber backbone in place, Anacortes launched its own network, Access Anacortes Fiber Internet, to provide high-speed, affordable internet to the community.

“With Access we are building our community’s quality of life,” said Mayor Gere. “Fiber infrastructure will be key to our long-term global success in Anacortes by improving households’ ability to connect to all of their devices, ensuring entrepreneurs have the infrastructure they need to innovate, and enhancing educators’ and health care providers’ platforms for learning and telemedicine. Expanded broadband in Anacortes will directly benefit our economy through additional employment opportunities, increased innovation, and incentives for companies to relocate or expand their business footprint.”

Access Anacortes Fiber Internet’s first customer was connected on October 25, 2019. On March 16, 2020, the GPON to the multiport service terminal (MST) construction in the two residential pilot areas was scheduled to begin, but that same week, Washington Governor Jay Inslee issued a stay-at-home order in response to the COVID-19 outbreak.

Broadband construction was deemed essential work, so the contractors were able to remain on site. City staff continued with installations in the commercial business district, where many businesses were empty. The plan for quickly ramping up the number of installed customers hit a snag when in-home installations came to a halt. Staff responded by completing the outside portion of the installations, bringing connections from the MST to the outside wallbox. No-contact installations to bring homes and businesses into service began on April 24 but at a slower pace than when full access to a home was available. With work, school, medical services and social connections all taking place at home, the community’s desire to transition to fiber internet was stronger than ever, but the safety of customers and employees remained a paramount concern.

Finally, on May 11, Access Anacortes Fiber Internet transitioned to in-home installations following Governor Inslee’s issuance of Construction Restart COVID-19 Job Site Requirements. To date, 240 customers are in service, and the city is gaining momentum toward reaching a 35-percent take rate in pilot areas. The city council approved continued expansion to pass the remaining 1,300 premises served primarily through aerial connections. The team is currently connecting 15 to 20 premises each week.

Conversations are underway about how to continue the growth of the network. Financing is necessary to expand the network throughout the city, where most premises will require underground connections. In the uncertain economic environment brought on by COVID-19, the city council and city staff are thoughtfully considering options.

Mayor Gere says COVID-19 has highlighted the importance of a fiber network. “We have discovered the use of our fiber is the most important infrastructure we have had to navigate COVID-19 as we have reimagined how we work, learn, seek medical care, and stay connected during this most difficult and unprecedented time.”