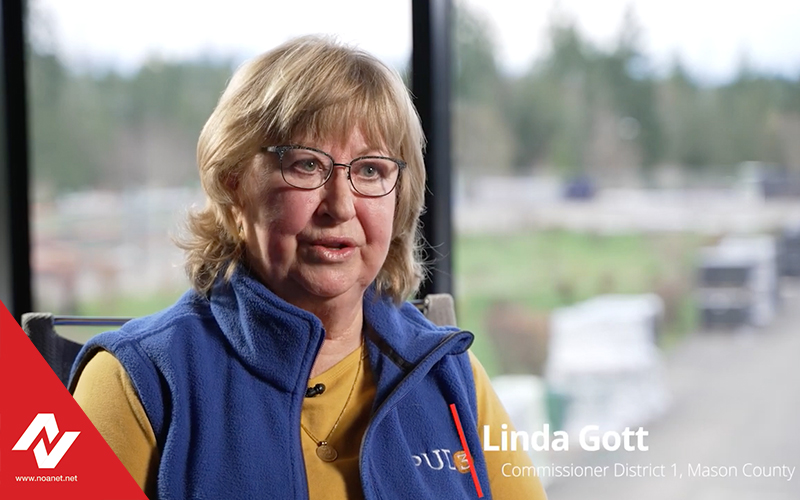 Mason PUD 3 Commissioner Linda Gott has blazed an indelible path in her service to public power, and her recent, widespread recognition is well-deserved. After announcing her retirement plans following nearly 24 years on its board, Linda was bestowed two prestigious awards honoring her career service and leadership by the Northwest Public Power Association (NWPPA) during its 82nd Annual Conference and Membership Meeting in Coeur d’ Alene, Idaho. At the May meeting, she was presented with the Life Member Award for retiring policymakers who’ve made notable contributions to the association and public power. She also received the John M. George Public Service Award, which recognizes policymaking officers who have demonstrated remarkable service to public power.

Here at NoaNet, Linda served as President of the board from 2014-2020. Her even-keeled leadership guided the NoaNet board through a period of tremendous growth and change with strength and grace and helped to shape a clearer mission and vision for the organization than ever before.

Linda has spent more than two decades promoting public power on local, regional, and national levels. Among her professional credits are serving on the American Public Power Association’s Legislative and Resolutions Committee and its Policy Makers Council; as past president of Public Utility Risk Management Services; six years on the NWPPA Board of Trustees; and serving on the board of directors for Energy Northwest, and of course, here at NoaNet. It was Linda who helped launch the telecommunication’s function of Mason PUD 3 and who served as a founding member of NoaNet in the early 2000s.

It’s been our privilege and honor to work alongside Linda on policy and advocacy, but it’s the residents of Mason County who’ve benefitted the most from her hard work. Her impacts resonate in PUD 3’s impressively low utility rates and high reliability—along with big strides in rural high-speed broadband. Not only was Linda NoaNet’s longest-serving BOD President, she’s also the third-longest-serving commissioner in PUD history, according to the PUD 3’s history book.

Her actions over 24+ years are too numerous condense here, but ultimately what matters is how Linda’s leadership and engagement protected the PUD 3’s interests and made her a standard-bearer in shaping policies across the table. You leave impossible shoes to fill, Linda!