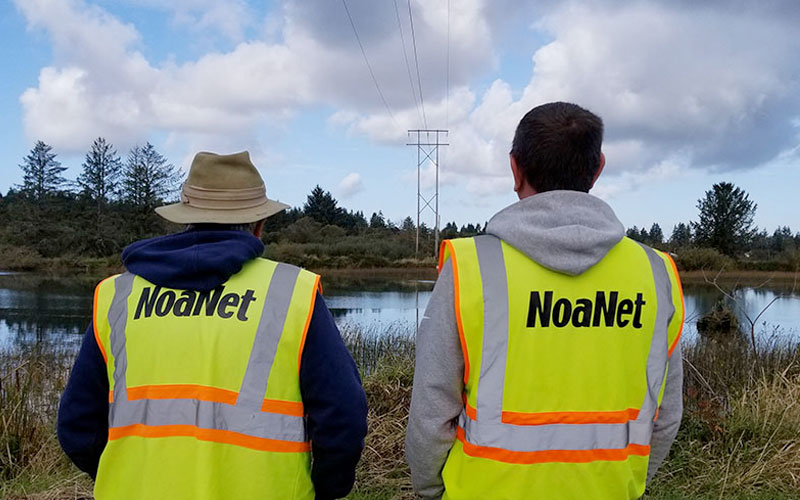 The infrastructure that makes high-speed Internet possible is extensive, costly and sometimes dangerous to install. I recently had the opportunity to visit a construction site where new fiber optic
backbone was being installed and gained some perspective on what it takes to make the Internet work beyond my home router.

Usually when fiber cable needs to be brought across bodies of water it will be done through established underwater conduit or lashed to bridges. This was not the case when earlier this month, NoaNet’s fiber network footprint expanded across the Lewis and Clark river, connecting Warrenton, Oregon to the rest of the backbone network. Neither of these traditional fiber facilitators were present and an alternative method was deployed to get the fiber across the river. What was available? High-voltage electrical towers.

It is usually about a 250-foot span from pole to pole when crews are hanging fiber optic lines. For this crossing, that span was nearly 600 feet with both towers in difficult to access farm land and the middle was covered with an expansive body water. After parking at the end of a dirt road and walking through a newly seeded piece of farm land, I arrived at the river’s edge. The construction crew was already hard at work trying to make the best use of a slack tide that would only last about 45 minutes. This problem-solving puzzle had a lot of moving parts that needed to be executed in the right order, at the right time, and in the right way to have a successful fiber route be put into place.

Using a device that resembled a potato gun, the construction crew launched a guide strand across the river which would bring the lasher across the water. That lasher would be brought 110 feet up on the towers to hang the fiber on. To keep the strand and lasher from getting swept away by the river’s current a boat was deployed that held the line mid-span to
keep the lines out of the water until the linemen could raise it.

While all of this is happening, two linemen strapped on their safety gear and pole climbing boots and climbed the towers on either side of the Lewis and Clark river. Held up by safety straps lashed around the massive poles, they quickly reached the dizzying height. The linemen established rigging and brought up the biggest hand drill I have ever seen to establish a connection point for the fiber installation while being held up by just a couple of straps. Yee-haw.

At the end of the day, a new route was established to create redundancy for the infrastructure which is critical for many aspects of modern life. Public safety systems, e-commerce, educational tools, and quality-of-life services will all pass over these lines for many years to come. My perspective has certainly changed from witnessing this unique build: it’s not just folks behind computer screens making the Internet happen. Turns out, it can be a wild and risky endeavor to bring the high-speed broadband to our homes and offices that makes our digital world turn.